What Do You Do With All That Pulp??

By Kassie Heisserer February 22, 2013
One of the questions I've had a lot lately is what to do with the pulp left over from juicing--the fibrous stuff that's left after all of the juice has been squeezed out. 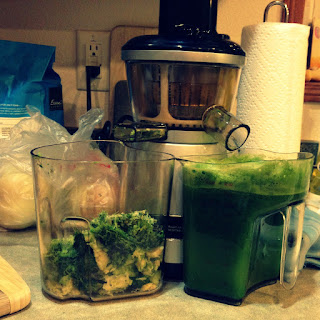 (Juice on the right, pulp on the left.)

Really, I don't need to post much of a how-to here, because it's already been done (probably a lot!). Here's one resource I found helpful.

For our family (and my own skills/abilities/time/patience), here's what I've tried and/or thought might actually work:


It has several recipes for making your own stock. I've done it twice now, and basically I just save and freeze most of the scraps I cut off of vegetables when juicing or other cooking: 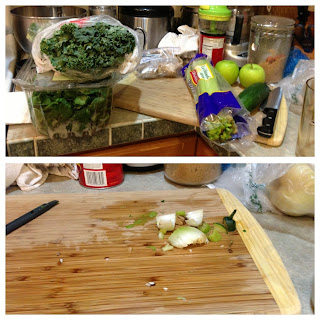 Yes, really just that little pile on the bottom picture is all that's left after juicing--now, I didn't use ALL of the vegetables in the top portion--that was just after I pulled everything out of the fridge...but my juicer can pretty much handle ALL of any kind of vegetable or fruit I throw at it...I probably needlessly cut things off! I'm only supposed to cut out large, hard pits/seeds (like what's inside a peach), and then I cut stuff into manageable sizes to fit into the juicer.

So when I have a few frozen bag-fulls of scraps, I combine them with 2-3 bags of pulp (maybe 2-3 cups worth?) and throw in a few other things I think might be lacking (garlic, for example). What I like about this is that even though we're not actually eating the pulp, I'm still getting two uses out of the vegetables (and fruit)--once as juice, and again as stock. 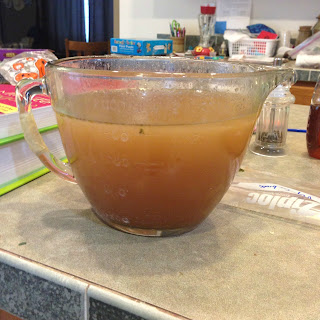 (This is from the first time I tried. It turned out great.)

It admittedly looks a little weird while cooking, but really, it's basically just ground/pureed vegetable skins & innards...nothing too scary! 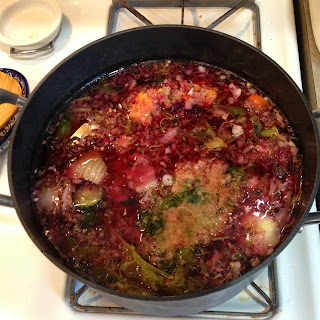 (This one turned out reddish-purple due to beets...
the subject of an upcoming post about FAILjuice!
However, it was just fine as broth.)

I did purchase a large mesh strainer before attempting it for the second time. I had a small one that I used the first time around, but I decided if it's something I'm going to do often, it is just too time-consuming to do it that way, because of all of the pulp.

(This is what I ended up with, which is an "8-inch strainer," but this ad takes you to a 3-pack...why you would need three is beyond me! I like how it's large enough to rest over bowls, etc, so my hands are mostly free to scoop and pour.) 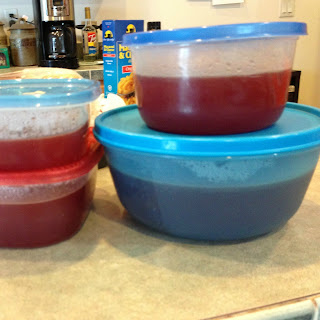 (Ready for the freezer, though I needn't have bothered
with about half of it, since I used it pretty much right away.)

It has turned out slightly different each time (well, all of twice), but it's been great both times. I've done "double" recipes, which I think has yielded about 8-10 cups of stock...and I've already used most of the red stock you see above, which was from my recent second batch.

4. The final way I've tried to use leftover pulp is dehydrating it and making a kind of fruit-leather, with mixed success. I probably just need more practice, and because my juicer makes such DRY pulp, I probably need to add non-juiced fruit to the mixture. We'll see if I keep trying or not! 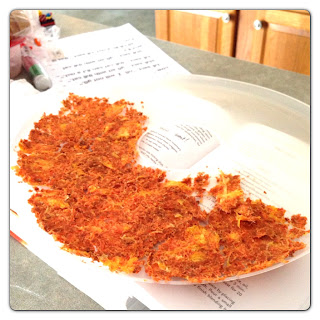 I think that's all for now, although I'm truly just about dying to share more about all I've been learning with all of the new recipes I've been trying, but there isn't quite enough time (or likely attention span!) to share it all! Hopefully more coming your way soon.