By Kassie Heisserer February 12, 2013
I am a fairly decent speller, but one word I just canNOT get cemented into my brain is protein. Even just now--I had to look up at my post title to make sure I was getting it right. I can never remember if the I in protein comes before the E or after it. As an English major who was admittedly quite good at (obsessed with?) remembering grammar and writing rules, it is possible that I just can't assimilate this word into my, um, lexicon (or...uh...spelling memory?) because it breaks the I Before E rule (it doesn't sound like neighbor or weigh either). On top of that, it also breaks German pronunciation rules (I also studied German in school)--just look at how my last name is spelled, and we pronounce the SECOND letter (as do all good German-speakers).

The reason I bring this up is because I've been spending a lot of time learning (obsessing?) about protein lately. (Yep--I hesitate every single time.)

Since we've been cutting meat out of our diet and to a lesser extent dairy & eggs, I wasn't sure if I was really feeding everyone enough protien (see???) protein--or even how much protein we actually need. So I did a little digging and found out that the figure can be a little squishy. The CDC recommends that men and women get about 46-56 grams per day, and that (my-aged) children get about 19 grams (read more here). But then I read on another site that the RDA was about .36 grams per pound that we weigh. That kind of formula makes a lot more sense to me than a blanket amount for large groups of people (all women need 46 grams? Really??).

That led me to wonder how much we were getting, and how much protein is in each kind of food. That last site I just cited (ha ha...site and cite...) also had a handy table detailing just that. I don't know that I came away with any "ah hah" moment or anything, but I determined that as long as I'm serving a varied diet (you know...not just pasta every night), we should be just fine.

Shortly after my protein research, one of the food experiments I tried was making my own "nut butter". (You know--peanut butter would be one example of a nut butter.) I took on Almond Butter, following the very simple and helpful instructions found here. She was totally right: you just need a food processor and patience. Oh...and possibly earplugs; my food processor is loud anyway, and with nuts rattling around in there, it was NOT quiet.

Here's what the process looked like, which took me about 25 minutes in all: 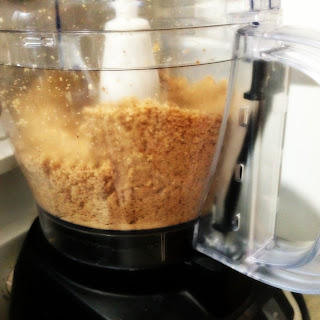 Pretty dry and fluffy at first. 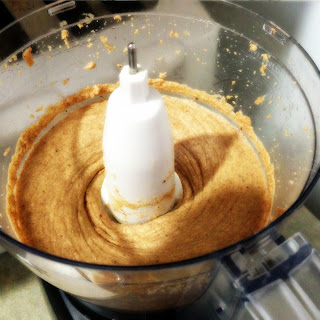 It begins to take on a more butter-like consistency, but it's very grainy still. 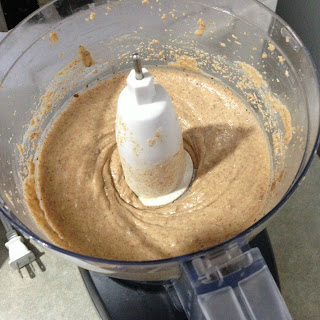 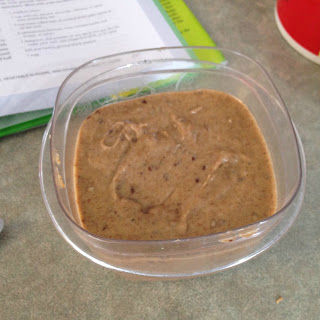 The finished product. I threw in a few spoonfuls of flax seed at the end, though I wish I would have thought of doing that while I was processing the nuts!

I found that I needed to stop the food processor pretty frequently and scrape down the sides, but it was really quite a painless process (other than the ear-splitting noise, that is)--anyone could handle this!

We've used it a few times, and it's not bad at all, though a little more bland (read: not as sweet) than you might be used to with commercial peanut butter. In an "almond butter & jelly sandwich", though, I can't even tell a difference.

One possible bonus: we saw a mouse run into our hall closet one night (I know--ick!), and so we set a trap in there, using the Almond Butter. The next morning, the trap had NOT gone off, but the mouse was lying NEXT TO the trap, DEAD. Bizarre, I know. But that's how we found it! (Unfortunately I did not have the forethought to snap a picture. It probably would have grossed many of you out anyway, since this is a post about food!!)

So my question is: Does anyone out there know whether almonds are poisonous to mice? Or flax seed possibly? Because I don't know how else to explain it!