It really was like Christmas...and probably for good reason, since the investment required in the purchase of this particular type of juicer probably will count as my Christmas present for the next several years. I had done a little bit of research on juicers (there's a nice, neat comparison table here), and decided I wanted a single-auger unit. The brand I landed on retails just under $400. That was a BIG ouch, but I was able to find a factory re-certified model, which knocked $100 off the price. Nick and I decided we could live with that, especially since we're considering it an investment in our family's health. (If you REALLY really want to know which brand I went with, here's a love-letter review of the juicer we have.) You can also click on the picture below, which is an ad that will take you to a retailer for purchasing the juicer (it's legit, but not where I purchased mine):

We were planning to leave for an extended-family gathering on Saturday morning, and I needed to pack as much as possible on Friday evening, but I still managed to squeeze in a little juicing anyway (pun halfway intended): 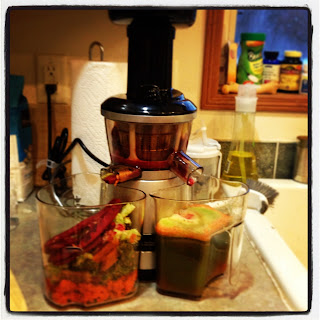 The last thing I juiced was some frozen mixed berries, which you can see on the top of the pulp pile (the bright red stuff--I know...I use them a lot...they're just so handy!), and they did get stuck, but it was easy to switch to reverse and get them un-stuck. I'm not sure if it was the quantity or the fact that they were frozen...or both--I haven't tried them since. We'll see.

Ingredients:
5 Carrots (not peeled--I just cut off the ends...not even sure I needed to do that)
2 apples (I think I used Granny Smith but I don't remember. I didn't seed or core them, just cut them into smaller chunks)
4 handfuls of baby spinach
1 stalk (?) of kale
3 celery stalks
2 sprigs of parsley
2 handfuls of frozen mixed berries
2 chunks of ginger (I REALLY like ginger in juices!)

I had everything out on a large cutting board just to the left of the juicer (I'm left-handed) and cut everything into chunks and just kept throwing them into the hopper as the juicer ran. I varied the order in putting things in, which I think helps a little with the processing (I'm just making this up...I really don't know for sure but I think it helps)--and true to reviews, the celery is the most difficult to process--the strings tend to get stuck in the "out" chute for the pulp, but I just keep trying to pull them out. I'll probably cut smaller pieces of celery in the future. Overall, it was pretty slick.

I have found that I enjoy the juice best when it's fairly cold, so I've taken to throwing in a couple ice cubes or refrigerating the juice for awhile if it tastes room temperature.

The next morning, before we left, I also managed to make a "breakfast juice" that we took with us in the LOOOOONG car-ride to Wheaton, MN. I substituted oranges for the grapefruit; also, I didn't peel the ginger. I really don't see the need to. It was great juice, and I think it made almost 24 oz...I may have increased the quantities slightly, but I know I didn't double the recipe!

Our kids were rock-stars in the almost-three-hour car ride, thanks in large part to their new LeapPads (Christmas gifts). Two summers ago, we had vowed NEVER to take a car ride longer than 1.5 hours, and preferably, not longer than 1/2 hour. But now, I have decided not to feel bad about doing what Nick and I call "doing what it takes to survive." We have to do what we can to ensure WE are at our best (or as close to that as we can get) in order to be good (or as good as possible) parents. And 3 hours of "he's touching me!", kicking, yelling, maniacal laughter (yes, that really happens when our eldest is dysregulated), and much, much more is just not going to put me at my best. So now, for long car trips, enter the LeapPad. We still had frequent bouts of "are we there yet?" (where do kids LEARN that???), but I could live with that. I just kept referencing the GPS's map for the incessant questioner (our youngest), where he could see for himself.

On Saturday, we didn't try to stick to a vegetarian diet, although I found myself eating a lot less than I normally would at a family gathering with a lot of GREAT food (Nick's family knows how to put out a spread!). Later, Nick commented on the same thing...so, maybe our bodies are already adjusting to our new diet...? Or it's psychological--either way, great! 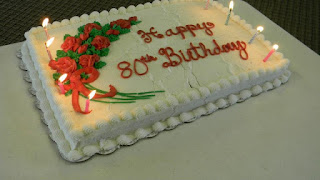 This past week, I've been trying out some recipes from my new cookbooks (links to which ones I have in this post), with some varied success. I consider myself an adequate cook--I'm not great at it, but I do enjoy it (most of the time). With anything, usually the recipes I use get better with subsequent efforts/adjustments...but my family is AMAZING when it comes to being good sports and trying (often less-than-tasty) new dishes. Seriously. I was an incredibly picky eater as a child (and still am at times), but MY children are rare specimens (in my humble opinion)...or maybe it's His way of giving us one area of life that isn't an extreme trial every day. I'll take it.

On Sunday night, I tried a vegan soup called "Pleasing Greens." It was not exactly pleasing, but it wasn't awful, either. It used quite a bit of kale, which I needed to use up, so that was the main motivation behind trying it. It also used cashews, which was intriguing. That and the fact that I had all of the remaining ingredients. Also, I like soup. 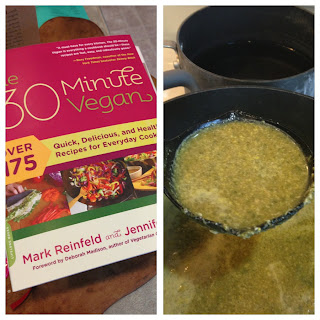 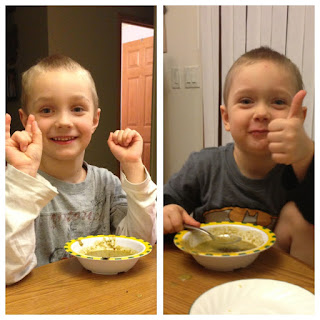 The most "exciting" aspect of this recipe was blending hot soup. The instructions said, "carefully blend, in a few batches. The hot liquid will expand in the blender so only fill it a little over halfway, make sure the lid is on tight, and...we like to put a dishcloth over the top for extra protection."

That last tip was quite helpful. I'm rather sad I didn't have the presence of mind to take a few pictures during the process, because it was quite the adventure. The biggest downside to the recipe was simply that I didn't blend the soup for long enough, so it was more chunky than pureed (is that how you write that?).


On Monday night, I went for the slightly more familiar and made "Pasta Florentine" from my vegan cookbook. My recipe wasn't technically vegan, because I used lactose-free dairy milk (it's what we had on hand), and I don't have any nutritional yeast (yet?). Oh, and I used regular mozzarella cheese because I also didn't have a vegan version--which probably defeated the entire purpose of using the lactose-free milk (for my lactose-intolerant son), but again--I used what I had on hand. 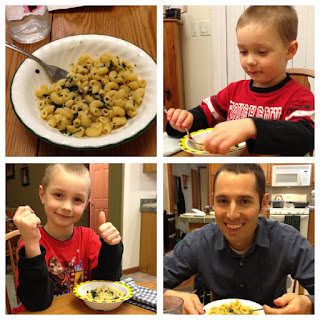 Pasta Florentine is (very) basically pasta with spinach. I didn't use quite enough spinach (I was a little nervous to use all that was called for), but that is easily adjusted next time. I still had some frozen spinach sitting around, so I used that along with fresh. It came out pretty well, and we all liked this recipe. I found myself wanting some kind of "crunch" in it, so maybe I'll experiment with something next time.