We started our first truly Vegetarian diet all day today: yogurt and granola for breakfast, cheese pizza (with fresh green pepper slices on top) and soy "Chik'n" nuggets for lunch, a horrendous juice for snack, and a less-than-average dinner with tofu (more on that later).

Juice Recipe #3: Don't Make This!
I found a recipe called "Citrus Surprise with Ginger," which was purportedly good for one's immune system. It turned out terribly bitter...most likely due to the fact that I didn't peel the lime beforehand. I also substituted an apple for 3 strawberries.

The recipe didn't specify what to do with the citrus, so I found myself once again searching for clues as to whether I should peel it first (I should). I saw something that said "always peel oranges but you don't have to with other citrus," so I peeled the clementines but put the lime in whole. I should have peeled the lime.

After tasting it, I added copious amounts of honey to the mixture, just to help dull the bitterness a bit, and so we all could get it down. I tried drying the pulp again afterward; I added 3-5 tablespoons of honey to the mixture and spread it out in the fruit leather tray of my food dehydrator. It took about 4 hours (maybe a bit less) to dry, and I did not like it at all (still too bitter). But Nick and the boys ate it all in less than a day!

The boys liked the soy nuggets, and I don't think I would have known the difference had I NOT known they were made with soy. I think that will be a good kind of "transition" food to keep around as we make these changes with the kids--although both of them are fairly adventurous when it comes to trying new foods...it's just the LIKING of the new foods that comes a bit harder.

So for dinner, like I mentioned earlier, I tried cooking tofu for the first time. I've eaten tofu before, but this was my first time attempting to cook it myself. It went okay, but not great.

My first mistake was attempting to cook something for which I did not have the correct seasoning. I found this recipe for Tofu Masala, which uses garam masala, an indian spice (I used basic curry powder instead (related, but not exactly correct). I also did not know what to do with the tofu (again--the online recipes are lacking some basic instructions for beginners like me), so I searched and found instructions that were not very helpful but did mention marinating a lot, which led me to doubt how well my recipe was going to turn out, since my tofu was just right out of the package. 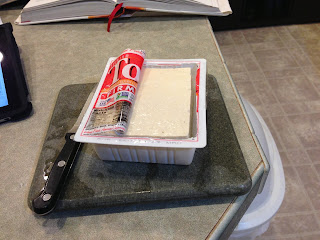 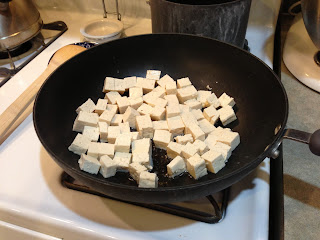 I had a gut feeling (yes, I do have them but tend to distrust them) that I should attempt to dry the tofu in some way before stir-frying it (or whatever it was I was doing), and I think I probably should have. I have since searched again for "how to cook tofu," which has yielded better results than the first time I searched. Maybe I didn't use the same search terms? Also, by then, I was already committed to the recipe and had already started cooking, and there was kind of no looking back at that point. 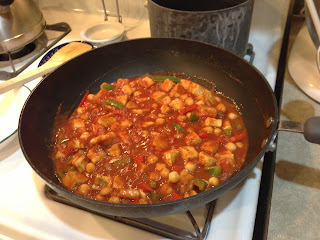 So in the end, I made the recipe, we all tried it, and here were our reactions: 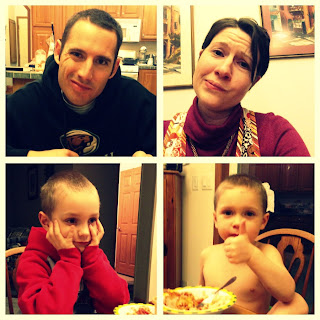 Not sure why Finnley gave it a thumbs up; I don't think any of us liked it much, but we ate it.

The following evening, I took all of the leftover Tofu Masala and kind of re-imagined it into this Taco Casserole. The reactions were much more positive from all of us. That's probably one I'll make again.

The NEXT evening, I made Chunky Vegetarian Vegetable Soup, which, as promised, was fast and easy. I even wrote a review of it (that's how much I liked it). I made some simple substitutions for things I didn't have (okra, soybeans), and the entire family liked this one: 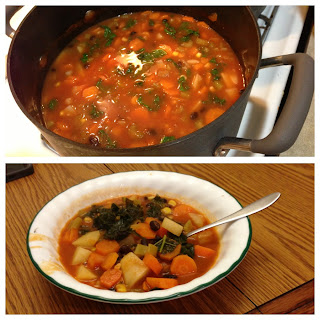 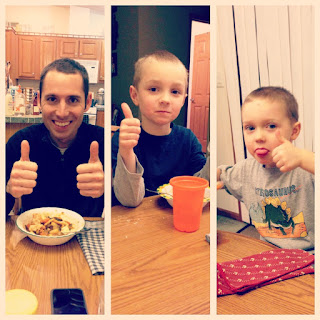 The NEXT next night, it was time for something easy and familiar (mostly just familiar). I made crepes. For the filling, we used more of the frozen mixed berries, crushed and sprinkled with some sugar. Gavin helped: 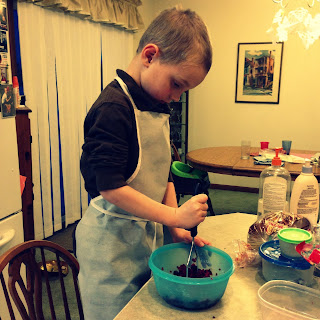 During this week (?), I also had made enough juicing recipes to convince my husband that we would be making a worthy investment by getting an actual juicer. It was a good trial run, using the blender and food processor (and going through a LOT of cheesecloth, which I learned is NOT really reusable...it just bursts when you're squeezing out the pulp)--we wanted to be sure it was something we would really do (and enjoy) on an ongoing basis.