By Kassie Heisserer January 21, 2013
Introduction: I decided to begin (b)logging our recent dietary changes and the successes and failures that go along with them. We'll see how far I get!

The Recipe (a.k.a., all I had in the house)
1 Honeycrisp apple
8 baby carrots (~equivalent to one actual carrot?)
1 stalk of slightly old celery
~3 Tbsp frozen spinach, partially thawed in the microwave
2 small handfuls of mixed frozen berries
~2 tsp dried parsley flakes
1 cup water

I don't actually own a juicer (maybe someday), so I searched on the Internet for how to make juice with a food processor and found this. I rough-chopped everything and put it into the food processor--apple core and everything. I started the processor with a short pulse to begin with, which shot about half of the water out through every non-sealed crack in the device (note to self: use a blender for part of the process next time). After the first pulse, however, it was fine. I poured the mixture into a cheesecloth-lined bowl and then lifted out the pulp inside the cheesecloth, and squeezed out as much of the juice as I could. (Yet one more reason to wash your hands well before preparing food!--as if
you actually needed another reason.)

The First Sip
I could really taste the spinach, which I did not appreciate. The next few sips were pretty much the same. But after that, I began to detect the celery and parsley scents, and slowly the taste began to grow on me. I then was able to taste the other ingredients, especially the parsley and berries. I've decided I like parsley, which came as a surprise. I also wasn't too sure how well the dried parsley would work.

Conclusion: not bad! I've had carrot juice before, which I like, so I'd like it to taste more of carrots next time. 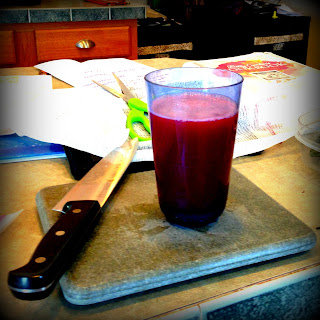 The next pressing issue was what to do with the pulp, so it was back to the Internet. 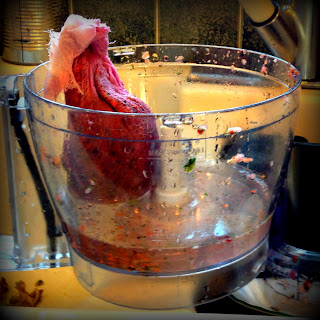 I landed on this and decided to attempt fruit leather, even though the pulp wasn't technically all fruit. I tried the oven method to speed it up a bit, just in case it turned out gross and not worth spending the time in the dehydrator. It turned out okay--not great, but not terrible either.

During the next few hours before my family got home, I proceeded to order 2 cookbooks (The 30-Minute Vegan and How to Cook Everything Vegetarian), started researching juicers, and made a shopping list for groceries. It was officially "on."