By Kassie Heisserer January 29, 2011
If I could embed a song to autoplay when you read this blog, it would be Getting Better by the Beatles. (There is probably a way to do that, but I haven't figured it out. Yet. Also, I myself hate being randomly accosted with music when I visit a website. So I guess you're off the hook for now. Also, I actually READ the lyrics to that song, and they're not all that fabulous. But the chorus was all I really had in mind anyway.)

I have been aware for some time that I haven't posted any really glowing posts recently; and that would be because I am, for better or worse, a very honest writer. I've always struggled with representing myself as something I'm not; and so, my last few posts reflected some of the darker aspects of this journey. Because they exist.

A couple days ago my boss and I were talking about the winter funk that seems to have descended upon our office just in the last couple weeks, and she commented that this past Monday was the Most Depressing Day of the Year (statistically speaking). I can't say I was surprised. January (in Minnesota anyway) is mostly long, cold and dark. It is Winter with a capital W. 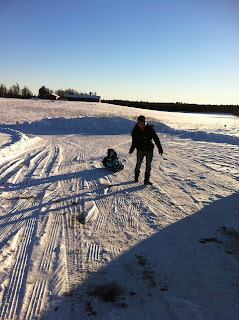 And yet, for me--for our little family project (and I mean that in a "we're still a work in progress" kind of way)--I finally feel like we've already emerging from the long darkness of Winter into the foggy grey light of a tentative Springtime. Tentative, yes, but Springtime nonetheless.

Back then, back in the Long Winter of our family, I would say to Gavin, "it's time for supper," which would usher in a full-on meltdown more often than not. And either Nick or myself would need to stop whatever else we were doing and make a full investment in bringing the meltdown to a close and assisting him in the journey to the bathroom to wash his hands and sit down at the table. If we didn't, we were guaranteed that the soap would end up being used for purposes other than its original intent, that items would disappear from our counter and be taken apart somewhere in a quiet corner, or that Finnley would be distracted, hurt, or otherwise led down the path of misbehavior. Now, during this time, I (usually) remembered that Gavin was acting out of anxiety. After all, how would YOU feel living with relative strangers after just having lived with other relative strangers for the past 11 months? And so we knew that we just had to work harder to do "normal" activities. And we (usually) did.

But now, in Springtime, I can say to Gavin, "it's time for supper," and he heads into the bathroom to wash his hands and then comes to the table himself. (Usually.) And no animals are harmed in the making of this activity (usually). Which means we don't have to work as hard. And that feels really really...relieving.

Because MAN--when we were first in the thick of it, there were moments when Nick and I looked wide-eyed at each other and said, "oh my goodness is THIS what we're really in for for the next 18 years???" And while we NEVER questioned our decision (truly--never), we both wondered if we really had it in us to make it through. Truly--and I consider myself a pretty tough cookie.

Which is what makes this Springtime--although tentative--so very relieving. We can finally take a full breath every once in a while. And it feels so good to breathe in fresh Springtime air.

But you might be remembering the title of this post. Or I just made you look again. In either case, the Realist in me wants to be sure you know that we still have plenty of Winter moments. But they're fewer and farther between. And, most importantly, we're making forward progress. We have a net gain at the end of the day. Usually.

Another example: Nick was just gone at a training for work from Tuesday-Friday. I was Parent-Employee-Cook-Laundress-Taxi-Homeowner (in no particular order) by myself. And I survived it. We had plenty of one-and-a-half-steps back, but I survived it. I can honestly say that I believe I would not have--could not have--survived it just 3 or 4 months ago. None of us were ready.

But we've been learning to trust each other--all of us. Our boys are learning that they really can feel safe with us...that we're going to be here (and so are they) no matter what they do, no matter how frustrated we get, no matter how many times they test the same boundaries. And let me tell you, they test them a LOT. Or rather, they go running headlong into them to see if they're crack under extreme stress. Sometimes they do. But they don't break. We work REALLY hard to make sure of that.

All in all, we're growing. Becoming the family we already are...if that makes sense. Even if it doesn't, that's okay. It's getting better all the time, which is all that matters. 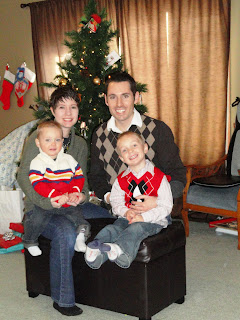