By Kassie Heisserer July 10, 2010
Adopting older children has its pros and cons.
Pro: we get more sleep.
Con: they're independently mobile.
Pro: one is already potty-trained.
Con: we have no idea what a 3-yr-old's bathroom schedule should be.
Pro: they came with good habits already built-in.
Con: they came with bad habits already built-in.
Pro: we can hold conversations.
Con: words come out that we didn't teach them.
You get the idea. 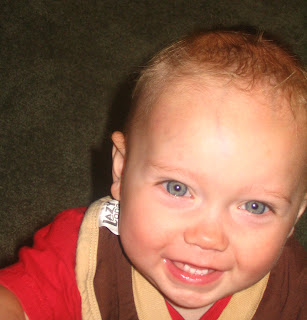 Some days the Cons seem to outnumber the Pros, but the crazy thing about it is that they never outweigh them. I mean, just look at those faces! And those faces were looking at ME that way--ME!
Probably the biggest Con is simply the fact that we (Nick & I) are the Late Arrivals to the game. At times we can only guess about what some of their prior experiences have been. (For example, our 3-year-old informed us he wants to go to swimming lessons. Huh.) We will never have the complete picture. People naturally ask us things, and sometimes our only answers can be, "I think so," or "I have no idea." 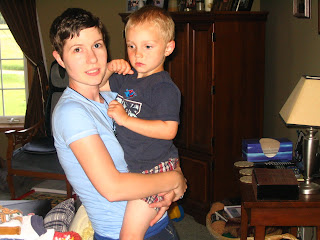 Even though we do have access to a lot of information and history, there are a lot of gaps. Sometimes we just have to guess. For a self-proclaimed control freak, it's really weird being that much out-of-control, especially when it comes to your own children. And yes, they are ours, even if they aren't officially ours yet. That's just a formality.
All of that to say that this has been a summer of firsts for us, even if it hasn't actually been...if that makes sense. Our first fireworks. Our first campfire and roasting marshmallows. Our first weekend getaway. Our first scraped knees and Spiderman band-aids. Our first wet bed. (And the second and third....) Our first thunderstorm and sleeping in the basement because it was way too hot upstairs. Our first baseball game.
And in the coming months, we'll be celebrating our first birthdays, except that they'll be second and fourth birthdays. That's okay. It's all part of the bittersweet experience that is adoption. It doesn't make them any less significant. In fact, maybe it makes them just a tiny bit more significant.
Who knows? We'll let you know when we get there. First.
KH